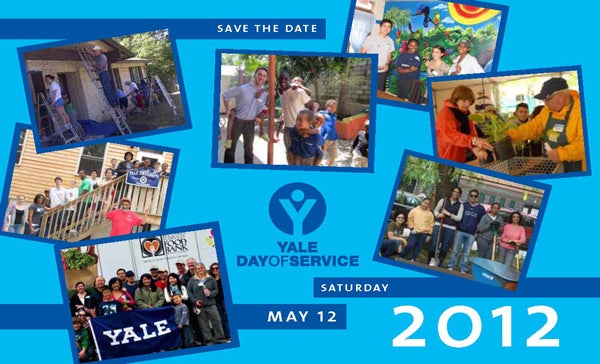 On Saturday, May 12, more than 4,000 Yale alumni, staff, students, family, and friends will make a difference in their local communities across the United States and around the world as part of the fourth global Yale Day of Service.

Service for society is a core tradition at Yale, both among students in New Haven and with generations of alumni and friends around the country and across the globe. The Association of Yale Alumni (AYA) has been organizing and supporting this worldwide mission with the annual day of service since 2009.

This year, Yale alumni will gather in service at hundreds of sites. Many of these projects are catalysts for ongoing community service by alumni throughout the year. All Yale students, staff, faculty, family, and friends are invited to participate. Site and registration information can be found online at www.yaledayofservice.org.

The program includes work with community partners in 36 states, Puerto Rico, and the District of Columbia, as well as sites in Nigeria, Switzerland, Japan, China, India, the Netherlands, Canada, Israel, Australia, Germany, Cameroon, Singapore, Hong Kong, Ghana, and the Netherlands. Examples of a few of the nearly 200 sites include:

“Yale is about community and connectedness, an education for impact and service,” says Michael J. Madison ’83, who lives in Pittsburgh, Pennsylvania, and serves as the chair of the AYA’s board of governors. “That’s what the day of service celebrates.”

The day of service has quickly become a Yale tradition embraced by alumni groups both near and far from New Haven.  “Alums tell us that they find this program a very meaningful way to connect with their communities and with Yale,” according to Jimmy Lu ’77 of San Francisco, the vice chair of the AYA. “Ninety-seven percent of those who joined the day of service last year said their experience was excellent, very good, or good — and an astonishing 99.8% said they would participate in the future.”

One 2010 alumnus wrote about his experience in 2011: “As a new alum, it was really great to be able to meet older alumni who still feel a special connection to Yale. It was just really cool to see how that connection has continued through the years.” A 1982 Yale graduate reported that she was “reminded of the amazing diversity of talent and backgrounds of fellow graduates, and our collective gratitude for the difference our Yale experience continues to make in our lives — stretching us and motivating us to think outside the box and to contribute to the greater good.”

This year, current Yale students are getting more involved than ever with the global day of service, thanks to the efforts of Students and Alumni of Yale (STAY), the new group supported by the AYA that brings students and alumni together for mentorship and service. “We see the day of service as a way to celebrate and sustain the commitment to service so important at Yale,” said Brandon Levin ’13, chair of STAY and president of the Yale College Council. Nearly 300 students are expected to participate, in New Haven, in their own hometowns, or in communities they will be working during the summer.