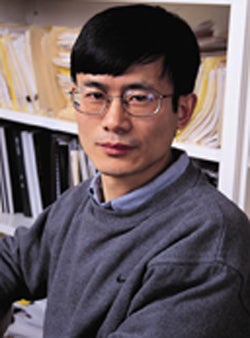 Xuhui Lee, recently appointed as the Sara Shallenberger Brown Professor of Meteorology, is an internationally renowned expert in the biophysics and biometeorology of natural and human-dominated ecosystems, including agricultural systems.

Lee’s work explores how radiation, water, heat, and trace gases are exchanged between vegetation and the atmosphere, as well as how these interactions influence large-scale biogeochemical processes such as the carbon cycle. His ongoing projects deal with isotopic tracers in the cycling of carbon dioxide and water vapor, farmland management for carbon sequestration in China, and biogeochemical and biophysical effects of land use on the climate system. The author of nearly 90 publications, his work has received grant support from national and international sources.

Lee obtained training in meteorology at the Nanjing Institute of Meteorology before receiving his Ph.D. in soil science at the University of British Columbia. He was appointed an assistant professor at the Yale School of Forestry & Environmental Studies in 1994 and promoted to professor in 2002. From 2004 to 2007 he was director of doctoral studies. In addition to teaching specialized courses in his research area, he has taught climate change science and policy.

The Yale professor currently serves as editor-in-chief of the journal Agricultural and Forest Meteorology.