Dr. Howard M. Spiro, the founding section chief of gastroenterology in the Department of Internal Medicine and former director of the Yale Program for Humanities in Medicine died on March 11, in Branford, Connecticut, after a brief illness.
Share this with Facebook Share this with Twitter Share this with LinkedIn Share this with Email Print this 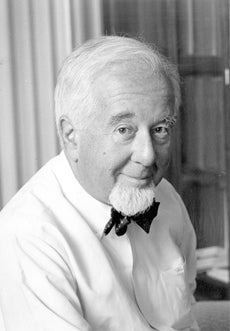 Dr. Howard M. Spiro, who served as the founding section chief of gastroenterology in the Department of Internal Medicine at Yale from its start in 1955 until 1982 and as the director of the Yale Program for Humanities in Medicine from 1983 until his retirement from the faculty in 1999, died on March 11 in Branford, Connecticut, after a brief illness.

Spiro was born in Cambridge, Massachusetts, on March 23, 1924. He graduated from Harvard College in 1944 and received his medical degree from Harvard Medical School in 1947. Upon graduation, his first impulse was to pursue a career in psychiatry. However, it is said that he felt he could not spend the rest of his life “just talking.”

Acknowledging the relationship he believed to exist between visceral symptoms and the psyche, he decided to pursue a career in gastroenterology. After completing an internship at the Peter Bent Brigham Hospital (now the Brigham and Women’s Hospital), he remained there to pursue research in that field. During this early period, he focused his research primarily on gastrointestinal physiology. His interest soon began to turn to the relationship between the mind and the gastrointestinal tract. After serving for two years (1951–1953) in the military as chief of gastroenterology at Madigan Army Hospital, he returned to Boston to spend two additional years in research at the Massachusetts General Hospital along with his wife, Marian Spiro.

In 1955, Spiro was recruited to Yale by Dr. Paul Beeson to establish the first full-time academic Gastroenterology Section at Yale. His ambition at that time was to establish a nationally recognized academic research section of gastroenterology, and to incorporate both medical and psychological concerns in the teaching and provision of patient care. The activities of the West Haven Veterans Administration became part of this new division, adding a wide variety of patients and research opportunities. Spiro was well known for his strong dedication to patients and bedside teaching. Teaching communication skills was a major part of his education of fellows, residents, and students. Interactions with other specialties were also of key importance to Spiro, as evidenced by weekly teaching rounds between the surgical and gastrointestinal trainees and a dedicated social worker in the clinic.

In 1965, Spiro established the Yale-Affiliated Gastroenterology Program, a unique educational collaboration between fellowship training programs in south-central Connecticut. Spiro traveled to these institutions with fellows from Yale accompanying him, allowing his trainees to observe a master clinician and diagnostician eliciting a complicated history from a patient and synthesizing it into a coherent picture. Spiro’s straightforward style, wit, maverick opinions, and love of repartee were known nationally and internationally.

Spiro was a prolific writer (bringing him back to his origins as an English major at Harvard), with contributions ranging from his single-author textbook “Clinical Gastroenterology,” to scientific peer-reviewed papers, to the popular books “Doctors, Patients and Placebos,” “When Doctors Get Sick,” and “Facing Death.” He also served as the editor of several journals.

Spiro was known widely as a skilled, caring, humanistic physician, who placed his patients at the center of his efforts. Like his mentor Paul Beeson, Spiro was especially known for — and took great pride in — his keen ability to listen to his patients. After becoming professor emeritus, Spiro continued to see patients as a consultant. He also continued to attend Medical Grand Rounds at Yale until the time of his passing, and he always reflected on the broader aspects of the topics, often asking thought-provoking questions, often of an ethical nature.

In 2000, Spiro was awarded the Julius M. Friedenwald Medal, the most prestigious award given to a member by the American Gastroenterological Association. The award is conferred in recognition of outstanding lifetime achievement in and contributions to the field of gastroenterology. On the 50th anniversary of the Yale School of Medicine section he founded, he was honored by his colleagues with a symposium and a crystal statue inscribed “To Howard M. Spiro, from his students.”

During his 58 years at Yale, Spiro transplanted some of his Harvard roots, becoming an avid Yale football fan. His trademark at Yale home games was wearing a raccoon coat during the cold weather, deviating from this practice only to don a Harvard pennant at “The Game” — although he always sat on the Yale side, sang all of the Yale songs, and readily waved the white handkerchief at the conclusion of a Yale victory. He was an active fellow of Berkeley College, talking to students about the medical profession, and was an avid sailor.

A memorial service has been planned for Saturday, March 24, at 11 a.m. at The Unitarian Society of New Haven, 700 Hartford Tpke, Hamden, Conn.

A separate memorial service at the medical school is being planned for the near future.