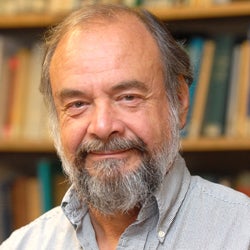 Durland Fish has researched ticks and their associated diseases for decades. A professor in the Division of Epidemiology of Microbial Diseases at the Yale School of Public Health, he has, among other things, contributed to the discovery that the bacterium that causes Lyme disease has European ancestry and that the disease, once nearly eradicated in North America, roared back with reforestation. More recently he helped develop a Lyme disease “app” for the iPhone and other Apple devices that provides users with detailed information about tick populations in any given area in the United States and even comes with a video on how to safely remove a tick. He has also worked on mosquito-borne West Nile virus and dengue fever. Students selected Fish as the school’s mentor of the year in 2010.

In terms of its incidence and range, what is happening with Lyme disease?

DF: It depends upon scale. The range of the tick vector is definitely expanding, and we have some estimates of how fast and where. More people are exposed, which increases the incidence along the expanding front. In areas where the tick has been established for some time, the incidence seems to stabilize, with small changes dependent upon local tick densities, which may fluctuate year to year for unknown reasons. Nationally, the case reports have been steadily increasing over the past 30 years. I expect this trend to continue.

DF: I am not entirely sure. In the Northeast, the deer tick was uncommon before the 1970s except for on Long Island and some smaller islands off Massachusetts. Deer ticks were first found in significant numbers when the outbreak of Lyme disease was first recognized in eastern Connecticut. Since then the ticks have expanded northward to Maine, westward to Pennsylvania and southward to Virginia. Initially, reforestation in the Northeast permitted the reintroduction of deer into many areas where they had been hunted to extinction. Later, suburbanization increased deer densities by fractionating forests and reducing hunting pressure. The deer tick is totally dependent upon deer for reproduction, and Lyme disease followed this pattern when the tick somehow made it to the mainland. A similar expansion is occurring in the upper Midwest, where ticks and Lyme disease have always occurred in northern Wisconsin and Minnesota. They have since expanded southward into Illinois, Indiana and southern Michigan. Most of the range expansion is probably due to changes in landscape and deer abundance, but climate change may also be playing a role. It is difficult to distinguish between the effects of these factors.

How serious a threat is Lyme disease to public health?

DF: The vast majority of cases do not cause serious illness, and in fact, many infections do not cause any illness at all. Still, with 30,000 cases being reported annually and probably 10 times more actually occurring, even a small minority of serious cases result in a significant public health problem. Some patients may experience arthritis or neurological problems years after initial infection if they are untreated, so early diagnosis and appropriate therapy are an important public health challenge. Knowledge of geographic areas where the disease is endemic because of the presence of infected ticks is crucial in educating the public and physicians about the risk of Lyme disease. Most of the country is at very little or no risk, but many of the population centers in the Northeast and upper Midwest are at high risk, so the severity of the problem is geographically focused.

Is there any possibility that the disease will be eradicated in the coming decades?

DF: I see no chance of this happening unless we find a way to control the tick populations. Little research is being funded to find new ways to eliminate ticks, so I do not see this happening anytime soon. I believe we will be living with Lyme disease for a very long time.

There is an ongoing, and sometimes acrimonious, debate between the scientific community and people who are ill and believe they are suffering from a chronic form of Lyme disease. Is there chronic Lyme disease?

DF: The Infectious Diseases Society of America has taken a strong stand against the belief that people are chronically infected with the Lyme disease bacterium. Unfortunately, a large number of patients have been misled by self-appointed lay experts who have organized support groups that aggressively dispute the views of the academic research community and public health agencies. They have a strong presence on the Internet and an alarming amount of political influence. The result is that a large number of people are being treated needlessly for an infection they do not have. The misdiagnosis and mistreatment of Lyme disease have the potential to become a larger public health problem than Lyme disease itself.

How has this belief taken hold?

DF: I do not know how or why this has happened, but it would be extremely important to understand. Such an aggressive attack on medical science is very worrisome to me, but the sociological and psychological aspects of disease are out of my area of training and expertise.

There has been a lot of research on Lyme disease, and much of this scientific evidence is publicly available. Is this evidence starting to convince people otherwise?

DF: It is hard to tell. People have all kinds of beliefs that defy science. Evolution is a prominent example. It is hard for me to understand how people can believe they have a chronic infection of Lyme disease when multiple, double-blinded, placebo-controlled studies of such patients have all demonstrated no benefit to prolonged antibiotic therapy. It is even more difficult to understand how people can believe that they have chronic Lyme disease when they have never been exposed to infected ticks. There are chronic Lyme support groups in many states where ticks that could infect humans do not occur.

If these people don’t have a long-term form of Lyme disease, what do they have?

DF: I do not know. I am not a physician, so I cannot answer that question. But I do understand science, and the science overwhelmingly indicates that they do not have a chronic infection of Lyme disease.

You are working on a book tentatively titled Lyme Scam. Can you briefly discuss its premise?

What do you see as the biggest challenge right now in Lyme disease research?

DF: Finding a way to reduce populations of ticks is by far the greatest challenge. I see no hope of solving this problem without significant progress in this area. The Lyme disease vaccine was a failure for a variety of reasons and there is not likely to be another. Even if there was, these ticks also transmit other diseases such as babesiosis, anaplasmosis and probably more. Babesiosis is also spreading, but at a much slower rate than Lyme disease. I see no reason why babesiosis will not someday affect as many people as Lyme disease does today, and it is a much more serious disease. It could ultimately eclipse Lyme disease as the most important vector-borne disease in the country. The organism that causes babesiosis is very similar to that which causes malaria, and scientists have been working on a malaria vaccine for more than half a century. It seems illogical to invest so much money in vaccine development and so little in tick control.

You have worked around ticks a long time. Have you ever been infected with the disease?

DF: I think Lyme disease is fairly hard to get. You have to be very unlucky. I have been living in areas where Lyme disease is highly endemic for more than 30 years, and I now live close to Lyme, Connecticut. I frequently find ticks on me and I have been bitten many times, probably more than I am aware. I have aches and pains, bad moods, memory loss and I occasionally limp, but I have never had Lyme disease.

Most people have a visceral aversion to ticks. How do you respond to them?

DF: I like weird stuff. There is a lot of it around, so I am never bored.

This story originally appeared in the Yale School of Public Health magazine. Click here to read more stories from that issue.