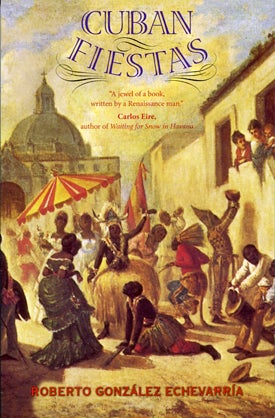 In this book, Roberto González Echevarría returns to the rituals that defined his young life in Cuba. Drawing from art, literature, film, and the national sport of baseball, he reveals the fiesta as a dynamic force of both destruction and renewal in the life of a people.

González Echevarría exposes the distinctive elements of the fiesta cubana that give depth and coherence to more than two centuries of Cuban cultural life. Reaching back to 19th-century traditions of Cuban art and literature, and augmenting them, in the 20th, with the arts of narrative, the esthetic performances of sport and entertainment in nightclubs, on the baseball diamond, and in movie theaters, “Cuban Fiestas” renders the strains of the fiesta and drum beats of the passage of time as keys to understanding the dynamic quality of Cuban culture. González Echevarría’s explorations are also illuminated by autobiographical vignettes that unveil the ever-shifting impact of the fiesta on the author’s own story of exile and return.