The impact of reform in Egypt was the focus of “Season Changes in the Arab World,” a symposium recently hosted by Yale Divinity School, in cooperation with Fulbright/AmidEast and Egypt’s Al Azhar University.

Seven Fulbright scholars from Al Azhar University, the oldest institution of higher learning in the Sunni Islamic world, met with Yale faculty members to discuss the Al Azhar Reform Bulletin of June 2011, a document crafted by Al Azhar experts to address the needs for democratic reforms and a role for religion in the new Egypt. 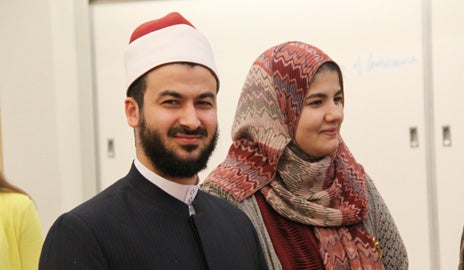 Several members of the Yale faculty spoke at the event and led panel discussions with the visiting scholars. Robert Post, dean of Yale Law School and the Sol and Lillian Goldman Professor of Law, delivered the keynote remarks and led a discussion on the importance of freedom of speech. The group also participated in panel discussions on gender issues and the Arab Awakening and the impact of the Arab Awakening on the Greater Middle East.

“Season Changes in the Arab World” is part of the continuing set of joint activities between Yale and Al Azhar, spearheaded by Sallama Shaker, visiting professor of Middle East and Islamic studies at Yale. The series receives support from the Yale Office of International Affairs.

“We are very pleased to host this important discussion,” said Yale Divinity School Dean Harold Attridge, “not only because Al Azhar is a valued partner, but because our students benefit from interacting with these young scholars from Egypt, who will be part of the next generation of great thinkers in the Middle East region.”

During their visit to Yale, several of the Fulbright scholars addressed the question “How will Egypt’s revolution affect its relationship with the West?” Here are their answers: