As next supercontinent forms, Arctic Ocean, Caribbean will vanish first

Geologists at Yale University have proposed a new theory to describe the formation of supercontinents, the epic process by which Earth’s major continental blocks combine into a single vast landmass.
By Eric Gershon
Share this with Facebook Share this with Twitter Share this with LinkedIn Share this with Email Print this

Geologists at Yale University have proposed a new theory to describe the formation of supercontinents, the epic process by which Earth’s major continental blocks combine into a single vast landmass. The new model radically challenges the dominant theories of how supercontinents might take shape. 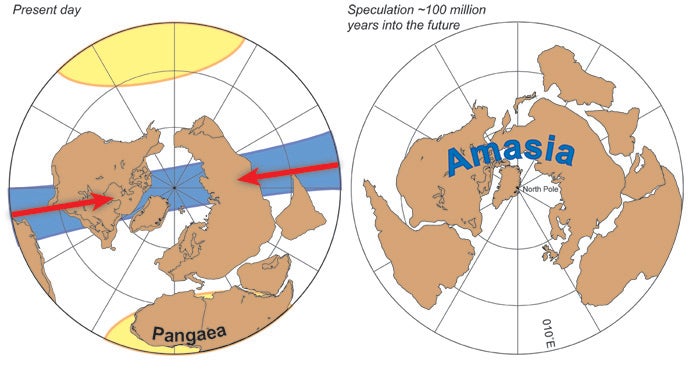 In a paper published Feb. 9 in the journal Nature, Yale researchers introduce a process called orthoversion, in which each succeeding supercontinent forms 90 degrees from the geographic center of its ancient predecessor. Under the theory, the present-day Arctic Ocean and Caribbean Sea will vanish as North and South America fuse during a mutual northward migration that leads to a collision with Europe and Asia.

“After those water bodies close, we’re on our way to the next supercontinent,” said Ross N. Mitchell, the Yale doctoral student who is the paper’s first author. “You’d have the Americas meeting Eurasia practically at the North Pole.”

The researchers do not speculate in the paper when the next supercontinent, named Amasia for its union of America with Eurasia, will emerge, but the event is far distant — between 50 million and 200 million years away, Mitchell said.

Mitchell and colleagues arrived at the new theory after an extensive analysis of the magnetism of ancient rocks. After each historical supercontinent assembled, it underwent a series of back-and-forth rotations around a stable axis along the equator. From one supercontinent to the next, the axes were offset from each other by about 90 degrees, the Yale team showed  — consistent with orthoversion, but not with either introversion or extroversion.

“This kind of analysis gives us a way to arrange continents in both latitude and longitude, providing a better understanding in patterns of biological dispersal and the dynamics of Earth’s deep interior,” said Yale doctoral student Taylor M. Kilian, the study’s second author.

Under the orthoversion model, either Asia or North America would become the center of Amasia, in a spot currently occupied by the Arctic Ocean. A newly formed mountain range will stitch them together.

“Such speculations far into the future cannot be tested by waiting around 100 million years, of course,” Evans said, “but we can use the patterns gleaned from ancient supercontinents to think deeply about humanity’s current existence in time and space within the grand tectonic dance of the Earth.”